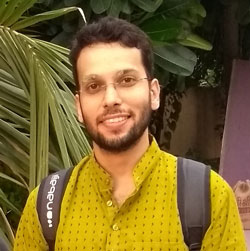 Priyal Mote is a designer-illustrator, working mainly for children's media. He believes in spreading happiness by creating positive impact on the young minds through visual narratives.

Priyal started his career in 2010, after graduating in architecture from Pune University, by working briefly at architectural firms in Mumbai and Pune. Since he had keen interest in visual arts, he went on to pursue Masters in Graphic Design from Florence Institute of Design International, Italy. After returning to India in 2013, he began working as a freelance designer-illustrator, in collaboration with Council of Architecture - Training and Research Centre, Pune. He also began teaching as a visiting faculty at Allana College of Architecture, Pune. Since then he has worked mostly in children's media, through editorial design, illustrations, set designs and workshops with various institutes and individual clients. He also retains interest in architectural design; and has been working as a design consultant on a few projects. He also began writing for children in 2017, with three titles under the series 'Yours Naturally' that got published through Jyotsna Prakashan. He is currently based in Noida, where he works as an art-editor with Dorling Kindersley Publication, since 2018. He continues to add more titles to the Yours Naturally series.

Illustrations In The Books